I've been working recently on a new project with my website (Jon Coe's website). At the moment it's hosted (very generously) in a dusty corner of a friend's webspace, but I'd really like to rent my own unmanaged server (partly because I enjoy getting my hands dirty with that kind of thing, but mainly because it would give me more control over the set up). It looks as though the cost would be about £11.50/month, which is just a bit too much to take out of the family budget for a hobby, but it occurred to me that, with some improvements to the content of the site and advertising, I might be able to make enough from it to cover the running costs.

The main focus of the site is genealogy, so I've begun by adding a section for genealogy resources, including a page with details of UK census dates.

Blimey! Has it really been two years?! Well, yes, obviously it has.

I'm not convinced that I'm all that likely to resume regular posting, but you never know. So what's happened since May 2007?

First up, Felix has grown... a lot. He's still a titch in terms of physical stature, but intellectually he's a giant. I suppose I would say that, wouldn't I? Could Bertrand Russell, at only two years old, postulate that if mummy says he's a big boy then he must be allowed to drink coffee? Did Russell paint his tummy with a black felt tip, likening himself to a police car, and then colour his nipples to stop himself falling out? I think not.

Secondly, True Knowledge, the company I've been working for for the last four years, has long since come out from under the radar. We're an, sorry, the Internet Answer Engine. We're currently beta testing a really cool local product/business search service. Imagine that you were cycling in the Highlands when you got a flat tyre. You might be in need of a bike pump in Inverness. Try it out!

Exciting! Just found out that the first of Philip Pullman's His Dark Materials trilogy will be released as a film in December. The UK title of the book was Northern Lights, but it seems that the film will be coming out under the US title, The Golden Compass.

The actress playing Lyra looks about right, and they've got Nicole Kidman playing Mrs Coulter, which is spot on (apart from the hair colour). Not so sure about Daniel Craig as Lord Asriel...

The film's official website has a little toy for creating your dæmon. Mine is a mouse apparently. L's is a lion...

Edit: Blimey. She's a moth now. She was a hare for a while, then a wolf.

There's something I've been neglecting to mention for the last 9 months... 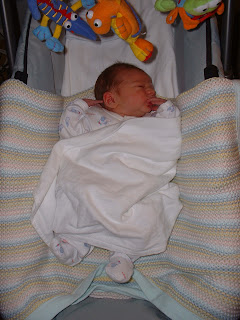 L and I are pleased to announce the birth of our little boy, Felix.

I was so in awe of L at his birth. Despite not having slept for 36 hours, she did it all with only 1 codeine, 2 paracetamol, and the better part of a cylinder of gas and air. We managed to get the pool at the Midwife Led Birthing Unit, so he was born underwater. He would've come out with his caul still intact, but the midwife decided to pop it at the last minute.

Mother and baby are doing well. L and I are both exhausted.